Passengers were getting ready to board the world’s longest flight on Thursday — a marathon 19 hours in the air between Singapore and New York.
Two pilots, a special “wellness” menu and more than seven weeks’ worth of film and television entertainment were expected to accompany travelers on the 16,700-kilometer (10,400-mile) journey to the Big Apple.
Singapore Airlines Flight SQ22 will use the long-range Airbus A350-900ULR, configured to carry 161 passengers — 67 in business class and 94 in premium economy.

For the flight crew — which also includes two first officers and a 13-strong cabin contingent — the work load will be broken up, the airline said, with every person getting a mandatory minimum four hours’ rest.
But for passengers, the challenge will be what to do with all that down time up in the air.
For those not packing a weighty novel (or two), there will be 1,200 hours of audio-visual entertainment to choose from.

Dining options will include dishes the airline says have been selected to promote well-being in the skies, with organic dishes on the menu.
The cabin has higher-than-normal ceilings, larger windows and lighting designed to reduce jet lag — all part of an effort to lessen the stresses that can accompany almost a day on a plane.


“Research has shown that hydration and food intake are important factors (to consider), such as avoiding foods that cause gas or bloating as well as excessive alcohol,” Rhenu Bhuller, a healthcare expert at consultancy Frost & Sullivan, told AFP.

“The biggest concern is Deep Vein Thrombosis from a combination of sitting for too long and also from dehydration,” said Gail Cross, an associate consultant at the National University Hospital in Singapore. 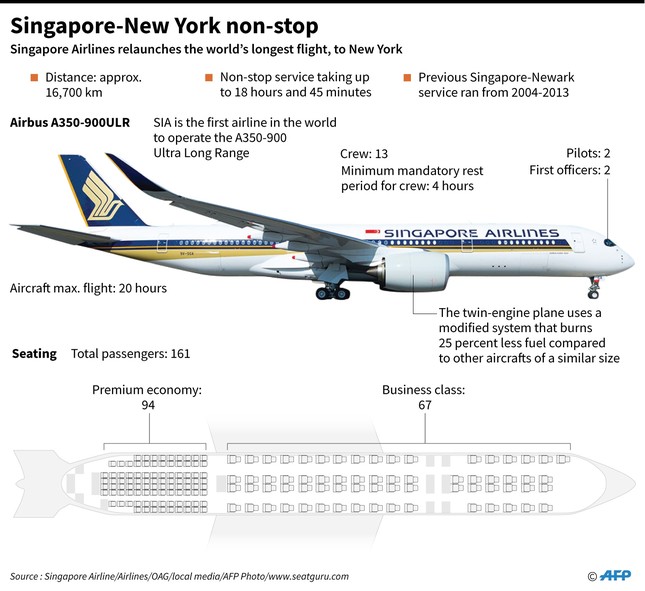 The twin-engine plane that will make the journey uses a modified system that burns 25 percent less fuel compared to other aircraft of a similar size, Airbus said.
The flight from the city-state to Newark Airport can take up to 18 hours and 45 minutes under normal weather conditions, but the pilots will have something in reserve in an aircraft capable of flying more than 20 hours non-stop.
Singapore Airlines originally flew the route for nine years using the gas-guzzling, four-engine A340-500 before abandoning it in 2013 because high oil prices made the service unprofitable.

But the carrier is hoping that the introduction of more fuel-efficient planes will set cash registers ringing even as crude prices soar above $80.Thursday’s flight will top the current longest direct link between cities — Qatar Airways Flight 921 from Auckland to Doha, which takes 17 hours 40 minutes.
“It’s turning out to be a race between a few airlines eyeing the longest routes inter-continentally,” said Shukor Yusof of aviation consultancy Endau Analytics.

“They are hoping to capitalize and exploit a very niche market,” he told AFP.
Facing increasingly strong competition in recent years, Singapore Airlines has consolidated its low-fare subsidiaries and is strengthening its premium segment.

“Ultra-long haul services comprise an important component of that strategy,” an airline spokesman told AFP.
The company is the first airline in the world to operate the A350-900ULR plane. It received the first aircraft in September. Six more are due for delivery by the end of the year.
“We are optimistic about the demand for non-stop services to the U.S.,” the spokesman said. Here are the world’s next-longest flights

Auckland has a second link to a Middle Eastern hub through Emirates Flight 449, which flies Airbus A380 superjumbos to Dubai at a distance of 14,200 kilometers.

United launched its service connecting Los Angeles’ LAX airport to Singapore using a 787 last year.At the time the 14,100-kilometer link was the longest non-stop flight by distance from the US to anywhere in the world, the airline said.

The 14,500-kilometer Qantas service launched this year is the first regular link between Australia and Europe, with the airline’s Boeing 787 fleet connecting Perth and London.

The Perth route is part of an ambitious plan by Qantas to eventually connect Europe with airports on Australia’s eastern seaboard as new, more efficient aircraft become available.
Chief executive Alan Joyce told media last year that a non-stop, 17,000-kilometer service from Sydney to London could be on the cards as soon as 2022 — but only if oil prices stay low enough to provide a decent return on the route.