In a bid to transform its mining sector, Zimbabwe has signed a $4.2 billion deal with a Cypriot investor to develop a platinum mine and refinery in the country. Zimbabwe mines minister Winston

One of the biggest storylines coming out of the recent midterm elections was the changing face of the newly elected members of Congress. The incoming 116th Congress will have its largest share of women and minority members to date. Among those new faces are the first Muslim woman, congresswoman-elect Rashida Tlaib of Michigan, and the first Somali American woman, congresswoman-elect Ilhan Omar of Minnesota.

Tlaib and Omar, along with congresswoman-elect from Queens, N.Y., Alexandria Ocasio-Cortez from New York, will be the youngest women ever sent to Congress. Yet this demographic shift has also brought concern from pro-Israel observers, who contend that the mainstream media has not properly highlighted some of these new representatives’ support for BDS and for the anti-Israel movement overall.

They make this claim with last month’s Pittsburgh synagogue massacre in mind.“Many in the media continue to show a dangerous selectivity when covering anti-Semitism. When an incoming member of Congress claims that Jews possess mind-control abilities—as Ilhan Omar has asserted—it is absolutely newsworthy and should be treated as such,” said Sean Durns of the Committee for Accuracy in Middle East Reporting in America.“The media’s selectivity undercuts their pretensions to fair and honest reporting on anti-Semitism,” he added. “With anti-Semitism rising in various ideological quarters, it’s critical to have reporting that is impartial, honest and straightforward.”

Dan Gainor, vice president of Business and Culture at the Media Research Center, echoed such sentiment. “The media have an enormous blind spot when it comes to liberal anti-Semitism—whether it’s [Nation of Islam leader] Louis Farrakhan, [Women’s March leader] Linda Sarsour or [congresswoman-elect] Alexandria Occasio-Cortez,” he told JNS. “Their bigoted comments don’t fit the media narrative, so they are downplayed or ignored.” 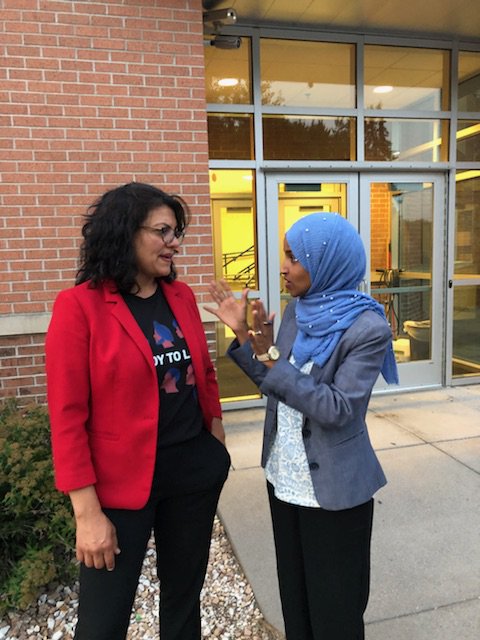 ‘As though these are appropriate, normal, acceptable sentiments …’

Tlaib, the first Palestinian-American elected to Congress, wrapped herself in a Palestinian flag at her victory party on Tuesday. She said, “I did this for my parents.” They are Palestinian.Additionally, she has expressed her support for BDS by opposing a two-state solution.

“One state. It has to be one state. Separate but equal does not work. I’m only 42 years old but my teachers were of that generation that marched with Martin Luther King. This whole idea of a two-state solution, it doesn’t work,” she said in an interview with In These Times, an American politically progressive/Democratic Socialist monthly news and opinion magazine published in Chicago.

Ocasio-Cortez has slammed Israel for its defensive responses against border and rocket attacks from Hamas in Gaza as “a massacre.” Although she has not explicitly supported BDS, she is affiliated with the Democratic Socialists of America, which endorses it.“Ilhan believes in and supports the BDS movement, and has fought to make sure people’s right to support it isn’t criminalized,” her office said on Sunday to MuslimGirl. “She does however, have reservations on the effectiveness of the movement in accomplishing a lasting solution.”

Sarah Stern, the founder and president of the Endowment for Middle East Truth (EMET), told JNS that “not a word has been mentioned in the mainstream media about any of this, as though these are totally appropriate, normal, acceptable sentiments.
“However, when there is a Republican conservative that makes any statement that looks like it might support ‘nationalism,’ that is immediately pounced upon,” she added.

In terms of their upcoming presence on Capitol Hill, they in no way will be in the position to turn Democratic congressional leadership towards an anti-Israel direction, said Ron Klein, chairman of the Jewish Democratic Council of America.“JDCA has spoken out on each of those candidates and didn’t endorse any of them, but there is absolutely no comparison between policy disagreements and the Pittsburgh massacre, neo-Nazi congressional candidates—all of whom ran as Republicans—or the rise in crimes targeting Jews and Jewish institutions, as found by yesterday’s FBI report,” Klein told JNS.

“We work closely with my former colleagues in Democratic leadership and are very comfortable with their positions, both generally and on the Middle East specifically,” he continued. “Whether it’s the House Foreign Affairs Committee, its subcommittee on the Middle East and North Africa, or the House Appropriations Committee, which appropriates all foreign aid, we are poised to have strongly pro-Israel chairs where it counts.”Although JDCA didn’t endorse the three then-candidates, it did endorse Democratic congressman-elect Antonio Delgado, who defeated incumbent Republican Rep.

John Faso in New York’s 19th congressional district. During the campaign, Delgado stated that “Israel is not a democracy.”
In response, Klein said: “Antonio Delgado recanted that statement and has talked about the importance of the U.S.-Israel relationship, not to mention his deep familial connection. We are proud to stand by our endorsement.”

In a bid to transform its mining sector, Zimbabwe has signed a $4.2 billion deal with a Cypriot investor to develop a platinum mine and refinery in the country. Zimbabwe mines minister Winston